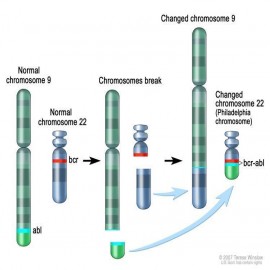 BCR-ABL1 refers to a gene sequence found in an abnormal chromosome 22 of some people with certain forms of leukemia. Unlike most cancers, the cause of chronic myelogenous leukemia (CML) and some other leukemias can be traced to a single, specific genetic abnormality in one chromosome. The presence of the gene sequence known as BCR-ABL1 confirms the diagnosis of CML and a form of acute lymphoblastic lymphoma (ALL).

Humans have 23 pairs of chromosomes containing inherited genetic information. Those genes contain the blueprints, in the form of DNA, for producing the proteins that our bodies rely on to function properly. While some genetic abnormalities are inherited, they can also come from changes that occur to genes or chromosomes after a person is born. This can happen through exposure to various environmental factors (e.g., radiation, certain chemicals) but more often for unknown reasons.

The resulting Philadelphia chromosome or BCR-ABL1 gene encode an abnormal protein that is responsible for the development of CML and a type of ALL. At diagnosis, 90-95% of cases of CML show a characteristic t (9;22) BCR-ABL1reciprocal chromosomal translocation. About one in four adults with ALL have the translocation.

The protein formed by BCR-ABL1 is a type of enzyme called a tyrosine kinase. That enzyme is responsible for the uncontrolled growth of leukemic cells. When large numbers of abnormal leukemic cells start to crowd out the normal blood cell precursors in the bone marrow, signs and symptoms of leukemia start to emerge. Treatment of these leukemias typically involves a tyrosine kinase inhibitor (TKI).

Testing for BCR-ABL1 detects the Philadelphia chromosome and BCR-ABL1 fusion gene or its transcripts, which are the RNA copies made by the cell from the abnormal stretches of DNA. The presence of the BCR-ABL1 abnormality confirms the clinical diagnosis of CML, a type of ALL, and rarely acute myeloid leukemia (AML).

There are several different types of BCR-ABL1 tests available, including.

BCR-ABL1 testing is used to:

BCR-ABL1 refers to a gene sequence found in an abnormal chromosome 22 of some people with certain forms of leukemia. Testing is ordered to detect the Philadelphia (Ph) chromosome and BCR-ABL1 gene sequence. It is used to help diagnose CML and specific types of ALL and, rarely, acute myeloid leukemia (AML) in which the BCR-ABL1 gene sequence is present (BCR-ABL1-positive). It is also used to monitor response to treatment and to monitor for disease recurrence. At diagnosis, 90-95% of cases of CML are BCR-ABL1-positive. About one in four adults with ALL have the sequence.

Several types of tests may be ordered to detect BCR-ABL1. These include chromosome analysis, the qualitative or quantitative BCR-ABL1 molecular genetic test, and/or fluorescence in situ hybridization (FISH). These help establish the initial diagnosis of CML or Ph-positive ALL. The quantitative test is also used to monitor how well someone responds to therapy.

Tests for BCR-ABL1 are often performed along with other tests if a health practitioner suspects that someone has leukemia and is trying to diagnose or rule out CML and Ph-positive ALL. The chromosomal analysis and FISH can also help to determine what percentage of the person's blood or bone marrow cells are affected.

The BCR-ABL1 can produce proteins of differing sizes and weights, depending on where the break in chromosome 22 occurred. In CML, the breakpoint in BCR is almost always in the major breakpoint cluster region (M-BCR), leading to the production of BCR-ABL1 protein of a larger size (the protein is called p210). Breaks in the minor breakpoint cluster region (m-BCR) leads to a shorter fusion protein (called p190), which is most frequently associated with Ph chromosome-positive ALL.

The quantitative BCR-ABL1 molecular test measures either of the breakpoints in the fusion gene. It is used to establish a baseline value and then to monitor the person's response to treatment and, if the person achieves remission, to monitor for recurrence. If treatment resistance or disease recurrence occurs, the BCR-ABL1 kinase domain mutation analysis should be performed to guide further treatment.

A small percentage of people with CML will have the BCR-ABL1 gene sequence but not the Ph chromosome. These cases either have variant translocations that involve a third or even a fourth chromosome in addition to 9 and 22 or have a hidden translocation involving 9 and 22 that can not be identified by routine chromosomal analysis. Since the treatment for BCR-ABL1-related leukemias specifically targets the tyrosine kinase protein produced, these people can still be monitored with quantitative BCR-ABL1 molecular testing.

If the BCR-ABL1 level rises, then it indicates disease progression or recurrence. It may also indicate that the person has become resistant to imatinib, the first-generation tyrosine kinase inhibitor. Additional genetic testing is often performed to detect the development of BCR-ABL1 kinase domain mutations associated with imatinib resistance.

If a person with ALL is not positive for the Ph chromosome and the BCR-ABL1 gene sequence, then that person will not be given a tyrosine kinase inhibitor drug and BCR-ABL1 molecular testing cannot be used to monitor the person.