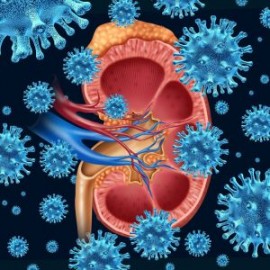 Polyomaviruses are small (45 nm, approximately 5,000 bp), DNA-containing viruses and include 3 closely related viruses of clinical significance; SV-40, JC virus (JCV) and BK virus (BKV). SV-40 naturally infects rhesus monkeys but can infect humans, while BKV and JCV cause productive infection only in humans. Acquisition of BKV begins in infancy. Serological evidence of infection by BKV is present in 37% of individuals by 5 years of age and over 80% of adolescents.

BKV is an important cause of interstitial nephritis and associated nephropathy (BKVAN) in recipients of kidney transplants. Up to 5% of renal allograft recipients can be affected about 40 weeks (range 6-150) post-transplantation. PCR analysis of BKV DNA in the plasma is the most widely used blood test for the laboratory diagnosis of BKV-associated nephropathy. Importantly, the presence of BKV DNA in blood reflects the dynamics of the disease: the conversion of plasma from negative to positive for BKV DNA after transplantation, the presence of DNA in plasma in conjunction with the persistence of nephropathy, and its disappearance from plasma after the reduction of immunosuppressive therapy. However, BKV DNA is typically detectable in urine prior to plasma and may serve as an indication of impending BKVAN. Viral loads of >100,000 copies/mL in urine may also indicate a risk for BKVAN.