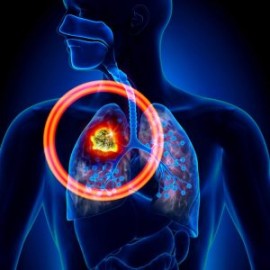 EGFR is a short name for the epidermal growt

h factor receptor gene. This test detects mutations in the EGFR gene in cancer tissue. This information is useful in guiding treatment of non-small cell lung cancer. The EGFR gene codes for a specialized protein called a receptor located on the surface of cells. Receptors recognize and bind to other substances, and the binding typically has a specific effect on the cells. EGFR is one of a group of receptors called receptor tyrosine kinases that help regulate cell growth, division, survival, and death. This regulation is a very complex process involving the activation of a series of signals along various pathways. Receptor tyrosine kinases like EGFR transmit signals from the surface of the cell to within the cell. In normal cells, the binding of epidermal growth factor to its receptor on the cell surface is an important signal that promotes cell proliferation. Certain mutations called "activating mutations" in the EGFR gene can result in excessive signaling for growth and uncontrolled proliferation of cancer cells.
Treatment that targets EGFR is a valuable molecular approach in cancer therapy. Examples of EGFR-targeted therapy include drugs such as gefitonib and erlotinib, which are small molecules called tyrosine kinase inhibitors (TKIs) that enter cancer cells and impede signaling. These drugs have been shown to be useful in treating non-small cell lung cancer (NSCLC). Studies have shown that targeted therapy with these TKIs will only work in a subset of NSCLC with specific activating mutations in the EGFR gene. If an activating mutation is present, as detected with an EGFR mutation test, then the drugs directed against EGFR are much more likely to be effective and the patient should benefit from targeted therapy.

**Note: EGFR mutation testing is not available in every laboratory. If a health practitioner sends a sample to a reference laboratory, the results may take a week before they are available.

In Nepal Decode Genomics and Research Center has been doing this testing at its Molecular Diagnostic Laboratory situated at Sinamangal.