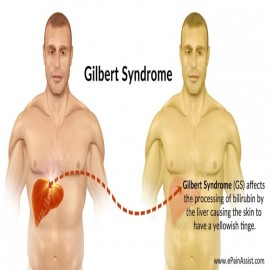 Gilbert syndrome is characterized by mild, chronic, unconjugated hyperbilirubinemia in the absence of liver disease or overt hemolysis and is found in approximately 3-10% of the general population. The diagnosis of this disorder is made on the observation of elevated unconjugated bilirubin levels and normal liver function. The importance of the diagnosis of this benign syndrome is to rule out more serious liver disease as the underlying cause of the hyperbilirubinemia. However, as the diagnosis is largely one of exclusion, it is sometimes difficult to dispel lingering fears of serious liver disease, causing patients unwarranted anxiety.

Gilbert syndrome is generally considered to be an autosomal recessive disorder. However there have been cases of heterozygosity reported in patients with Gilbert syndrome, particularly in the Asian population.

Individuals with Gilbert syndrome have a reduced level of hepatic bilirubin UDP glucuronosyltransferase 1A1 (UGT1A1), the enzyme necessary for the conjugation of bilirubin. This enzyme is encoded for by the UGT1A1 gene on chromosome 2q37. A polymorphism in the promoter region of the UGT1A1 gene has been identified in the majority of Caucasian individuals with Gilbert syndrome (80-100%). These individuals are homozygous for two extra bases (TA) in the promoter region of the gene and have an A(TA)7TAA sequence rather than an A(TA)6TAA sequence. This change is associated with reduced expression of the UGT1A1 gene and thereby reduced levels of the UGT1A1 protein. The frequency of the A(TA)7TAA allele is approximately 40% in the general population. The A(TA)7TAA allele is also known as UGT1A1.

A missense change in the UGT1A1 gene, G71R, has been identified in approximately 30-40% of Asian individuals with neonatal hyperbilirubinemia and has been implicated in Gilbert syndrome in this population. This change is also associated with a decreased expression of the UGT1A1 gene. The frequency of the G71R allele is approximately 10% in the general Asian population. The G71R allele is also known as UGT1A1.