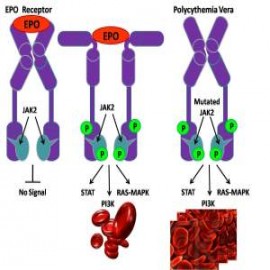 The Janus Kinase 2 gene, called JAK2 for short, provides instructions to cells for making the JAK2 protein. This protein promotes cell growth and division and is especially important for controlling blood cell production within the bone marrow. This test looks for mutations in JAK2 that are associated with bone marrow disorders caused by the production of too many blood cells.

The primary JAK2 test is JAK2 V617F, named for a mutation at a specific location in the JAK2 gene. JAK2 V617F mutation is acquired as opposed to inherited and results in the change of a single DNA nucleotide base pair. In JAK2, this kind of mutation, called a point mutation, replaces the normal amino acid valine (abbreviated V) with phenylalanine (abbreviated F). This amino acid change results in a JAK2 protein that is constantly “on,” leading to uncontrolled blood cell production.

Other mutations in the JAK2 gene are also associated with MPNs. Over 50 different mutations have been identified. There are tests available to detect mutations in JAK2 exon 12 and to identify other non-V617F mutations.

The JAK2 mutation test may be used, along with other tests such as CALR mutation and MPL mutation testing, to help diagnose bone marrow disorders that lead to the production of too many blood cells. These disorders are known as myeloproliferative neoplasms (MPNs).

The JAK2 mutation test is typically ordered as a follow-up test if a person has a significantly increased hemoglobin, hematocrit, red blood cells and/or platelet count and the healthcare practitioner suspects that the person may have an MPN, especially polycythemia vera (PV), essential thrombocythemia (ET), or primary myelofibrosis (PMF).

The primary genetic test for JAK2 mutations that lead to MPNs is JAK2 V617F, named for a mutation at a specific location in the JAK2 gene. It is typically ordered first. If it is negative, then tests for other mutations in the JAK2 gene that are also associated with MPNs, such as JAK2 exon 12, may be used to help make a diagnosis.

A positive JAK2 V617F mutation test, along with other supporting clinical signs, means it is likely that the person tested has an MPN. Other testing, such as a bone marrow biopsy, may need to be performed to determine which MPN the person has and to evaluate its severity.

A negative JAK2 V617F test but a positive JAK2 exon 12 mutation or other non-V617F mutation test along with supporting clinical signs means it is likely that the person has polycythemia vera. About 3-4% of people with PV have an exon 12 mutation.

Negative results for all JAK2 mutations does not necessarily rule out an MPN—the person may have a JAK2-negative MPN or the JAK2 mutation was not detected during testing. The JAK2 tests are performed on the genetic material found in white blood cells called granulocytes (from blood or bone marrow) and red cell precursors (from bone marrow). Not all granulocytes and red cell precursors will possess the JAK2 mutations. The proportion of affected cells will vary from person to person and may change over time. If there is only a small number of cells that have the mutation in the blood sample tested, then it is possible that the mutation will not be detected.