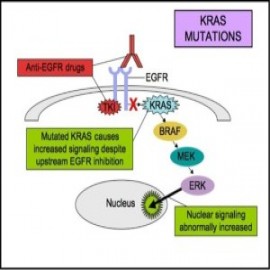 This test detects specific mutations in the KRAS gene in the DNA of cancer cells and tissue. The presence of these mutations may indicate that certain drugs will not be effective in treating the cancer.

KRAS is a short name for the gene v-Ki-ras2 Kirsten rat sarcoma viral oncogene homolog. It is one of a group of genes involved in a pathway called the epidermal growth factor receptor (EGFR) pathway. This complex signaling pathway involves numerous components that relay signals from outside of the cell to within the cell to help regulate cell growth, division, survival and death.

In many normal cells, binding of epidermal growth factor (EGF) to its receptor (EGFR) on the surface of the cell is an important signal to cell growth and division. Other signals in the pathway involve a class of proteins called tyrosine kinase (TK) enzymes and a protein produced by the KRAS gene. Normally, the components of the pathway interact in the regulation of cell growth and division and do not individually stimulate cell proliferation.

However, in some cancers, EGFR becomes active even in the absence of EGF, leading to uncontrolled cell growth and division. Drugs that inhibit EGFR or tyrosine kinase enzymes are often helpful for treating such cancers. Some of these cancers, though, have a mutation in the KRAS gene that produces an abnormal K-Ras protein. The abnormal protein is always active and can stimulate cell growth even in the absence of signals from EGFR and TK. In such cancers, drugs that inhibit EGFR or TK will not be effective.

KRAS mutations are found in many different types of cancers but have been most extensively studied in colon cancer and non-small cell lung cancer. Approximately 40% of colon cancers and 20% of lung cancers will have KRAS mutations. There are several different methods of testing for KRAS mutations, but all of them involve evaluating the KRAS gene in tumor tissue.

This test detects the presence of the most common KRAS gene mutations in the DNA of cells in tumor tissue in order to help guide cancer treatment. KRAS mutation analysis is ordered primarily to determine if a person with metastatic colon cancer or non-small cell lung cancer is likely to respond to standard therapy, an anti-EGFR drug therapy. Tumors with the KRASmutation do not respond to anti-EGFR therapy.

If a person's tumor is negative for the most common KRAS mutation, tests for other less common mutations not detected by the current test may be used to help predict therapeutic responses.

A negative result on the KRAS test indicates that an individual's cancer may respond to anti-EGFR therapy, but the lack of a KRAS mutation as determined by the KRAS test does not ensure this. A negative test could occur when the tumor tissue sample is insufficient and/or when the cancer is heterogeneous (some cells contain the mutation and others do not). Additionally, there may be KRAS mutations that are not detected by some tests because of their particular location on a DNA chain. Other factors may also lead to resistance to anti-EGFR drugs.

Note: KRAS mutation testing is not available in every laboratory. If a health practitioner sends a sample to a reference laboratory, the results may take a week before they are available.

In Nepal Decode Genomics and Research Center has been doing this testing at its Molecular Diagnostic Laboratory situated at Sinamangal.