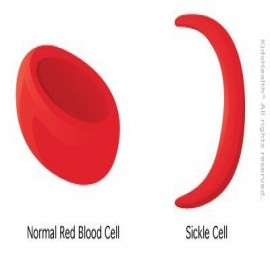 Sickle cell anemia, also called sickle cell disease (SCD), is an inherited disorder that leads to the production of hemoglobin S (Hb S or Hgb S), an abnormal form of hemoglobin (hemoglobin variant). Hemoglobin is the iron-containing protein found inside red blood cells (RBCs) that carries oxygen from the lungs to all parts of the body and releases it to the body’s cells and tissues.

Hemoglobin is made up of heme, which is the iron-containing portion, and globin chains, which are proteins. The globin protein consists of chains of amino acids, the “building blocks” of proteins. There are several different types of globin chains, named alpha, beta, delta, and gamma. Normal hemoglobin types include:

Hemoglobin S results from a mutation affecting the beta-chain of hemoglobin. This mutation can affect either one of the beta chains of Hb A (heterozygote status or HS trait) or both of them (homozygote status or sickle cell disease).

The hemoglobin S mutation results in hemoglobin that is less soluble within a red blood cell, which reduces the efficiency of oxygen exchange and can cause the formation of polymers in the cell during normal stages of oxygen transport. These polymers can change the shape of the RBC from a round disc to a characteristic sickle shape, especially in reduced oxygen environments. The altered shape limits the RBC’s ability to flow smoothly throughout the body. The sickled cells can become stuck and obstruct small blood vessels, causing tissue damage.

Sickled RBCs are generally short-lived, only lasting about 10-20 days instead of the normal 120 days. To compensate, affected individuals must produce more red blood cells at a much faster rate and release them into the bloodstream earlier. They may become increasingly anemic when the body cannot keep up with the rapid RBC destruction, resulting in a condition known as hemolytic anemia, smaller than normal red cells (microcytosis), and an increased number of newly produced red cells called reticulocytes (reticulocytosis).

Sickle cell tests are used to identify the presence of hemoglobin S, to evaluate the status and number of a person’s red blood cells (RBCs) as well as hemoglobin level, and/or to determine whether a person has one or more altered hemoglobin genecopies. The presence of other abnormal hemoglobin variants may be seen but would require additional testing to identify specifically what type.

There are almost 900 hemoglobin variants of which hemoglobin S is one. To screen for and to confirm the presence of hemoglobin S, a variety of tests have been developed. Some of these tests are:

Screening may be performed on family members of an individual who has sickle cell trait/disease. It also may be done for those who were not screened at birth because universal newborn testing was not yet implemented and who may choose to be tested if their status is not known.

For Screening, Diagnosis, and Confirmation:

Particularly in people with sickle cell disease, the relative amount of Hb S will be measured and followed over the course of treatment, for example, after a blood transfusion to ensure that the hemoglobin S level has been reduced.

Other tests that may be used to help evaluate someone who is suspected of having or who is known to have sickle cell trait or disease include:

What Does the Test Result Mean?