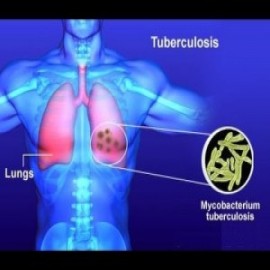 Tuberculosis (TB) is an infectious disease caused by Mycobacterium tuberculosis.

TB primarily affects the lungs (pulmonary TB). Other parts of the body may become involved as well, however, either as part of the initial infection or, more commonly, as part of a late widespread infection. Photo source: National Institute of Allergies and Infectious Diseases

TB is spread when a person with active, infectious TB disease coughs, sneezes, or spits, releasing droplets containing TB bacteria into the air, which are then inhaled by someone else. A single cough from a person with active pulmonary TB may contain 3,000 droplets with TB bacteria. If as few as 10 of those bacteria are inhaled by someone nearby, that person can become infected. An individual with active pulmonary TB disease may infect 10-15 other people through close contact over the course of a year.

Not everyone who is exposed to TB bacteria will develop an infection, and not all of those who become infected will develop symptoms of TB disease. Those who are infected but have no symptoms are said to have a latent TB infection. Those who do become sick have an active infection.

Both latent and active TB can be treated and cured with a combination of antibiotics that must be taken for several months. Without treatment, active TB disease may cause serious illness or even death.

TB has been a leading cause of death for thousands of years. In the days before the discovery of antibiotics, it was called consumption, and those who contracted it were put into long-term hospitals called sanatoriums for the rest of their lives. Although its frequency has decreased dramatically in the United States, the World Health Organization (WHO) estimates that one-third of the world’s population has latent TB. Worldwide, active TB disease is the most common cause of infectious disease-related death, especially among those who are living with HIV, killing about 1.5 million people a year.

In the U.S., there were more than 9,400 reported cases of TB in 2014. This represents about 2.6 cases per 100,000 persons, the lowest recorded since reporting began in 1953. There was resurgence in new cases in the early 1990s, but the rate of TB infections has been steadily declining since then. Nevertheless, certain populations within the U.S. are at higher risk of infection. These include:

While the numbers of new cases of active TB have again declined in the U.S. due to constant vigilance by the medical community, TB remains a significant national and global public health problem.

One of the many challenges in managing TB worldwide is the number of new cases that are cannot be cured with the standard antibiotics used to treat the disease. This is known as multidrug-resistant tuberculosis (MDR-TB).

Testing for Mycobacterium tuberculosis infection may begin with a TB screening test. These screening tests are not diagnostic; they do not tell whether a person has latent TB or an active infection. Additional exams and tests (see Tests to Diagnose Active TB below) must be performed in follow up to a positive screening result.

TB screening is not used as a general screening test for all people but is targeted at those who are at a high risk for contracting the disease and those who have signs and symptoms consistent with an active TB infection. TB screening may also be done as part of a physical examination prior to starting school or a new job. There are two types of tests used to screen people at high risk for TB; usually only one of the tests is performed:

Acid-fast bacilli (AFB) testing can be used to identify and confirm active infection with M. tuberculosis as well as other Mycobacterium species. (Mycobacteria are called acid-fast bacilli because they are rod-shaped bacteria (bacilli) that can be seen under the microscope following a staining procedure in which the bacteria retain the color of the stain after an acid wash (acid-fast).) One or more of these tests may be performed when a person has signs and symptoms or TB disease or screened positive for TB infection.

Usually three sputum samples are collected early in the morning on different days. If the affected person is unable to produce sputum, a bronchoscope may be used to collect fluid during a procedure called a bronchoscopy. In children, gastric washings/aspirates may be collected. Depending on symptoms, urine, an aspirate from the site of suspected infection, cerebrospinal fluid (CSF), other body fluids, or biopsied tissue samples may be submitted for AFB smear and culture.

X-rays or CT scans are often performed as a follow-up to positive tuberculin skin or IGRA tests to look for signs of Mycobacterium tuberculosis in the lungs and help determine whether a person has active tuberculosis disease or a latent TB infection. Infection with TB can cause a number of characteristic findings on x-rays, including cavities (holes) and calcification in organs such as the lungs and kidneys.